17 year old Aryavardhan and 22 year old Arshad, both above knee amputees of Telangana have just returned after scaling Mt. Bhageerathi (21365 ft) on 24th August 2019 , Uttarakhand, where the base camp was at Nandanvan 14655 ft  (altitude, and the training took place all the way up to camp 1 at 17552 ft altitude. The team has completed their training by climbing Mt.Bhagirathi II upto 18000ft as there was heavy snowfall beyond, in association with Aditya Mehta foundation and BSF Institute of Adventure And Advance training -BIAAT for PARA-MOUTAINEERING. By 2020 we plan to scout 12 Para-Athletes with different levels of disability to summit Mt. Everest. 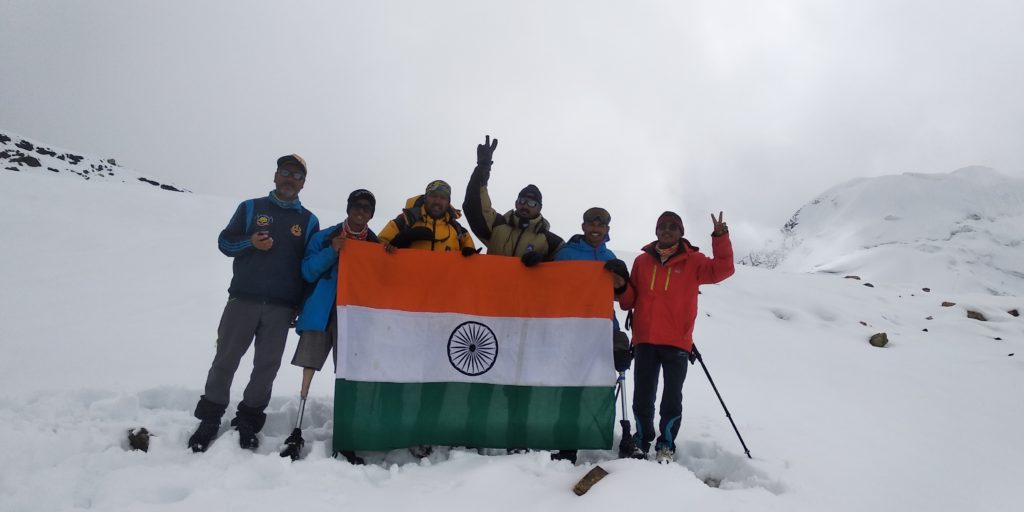 Weather conditions were very tough for the para-mountaineers. They experienced heavy rain, hail and later snowfall at heights of 18,000ft and above. They saw morraines, boulders, rivers, steep uphills and negotiating difficult landscapes and crevasses for trekking. They had only a two-day window to summit due weather conditions. They trained in ice craft, snow craft and moraine walk, glacier walk. They carried their own rucksacks with basic ammenties and got acquainted with climbing gear and shoes. The more they walked more their lung capacity increased and concentrated on building balancing muscles.

“I have never walked more than 3km in my life…with this mountaineering expedition I could conquer 16 km non- stop of stiff uphill terrain with my prosthetic limb. I feel great!,” says Arshad, an above knee amputee from Telangana, 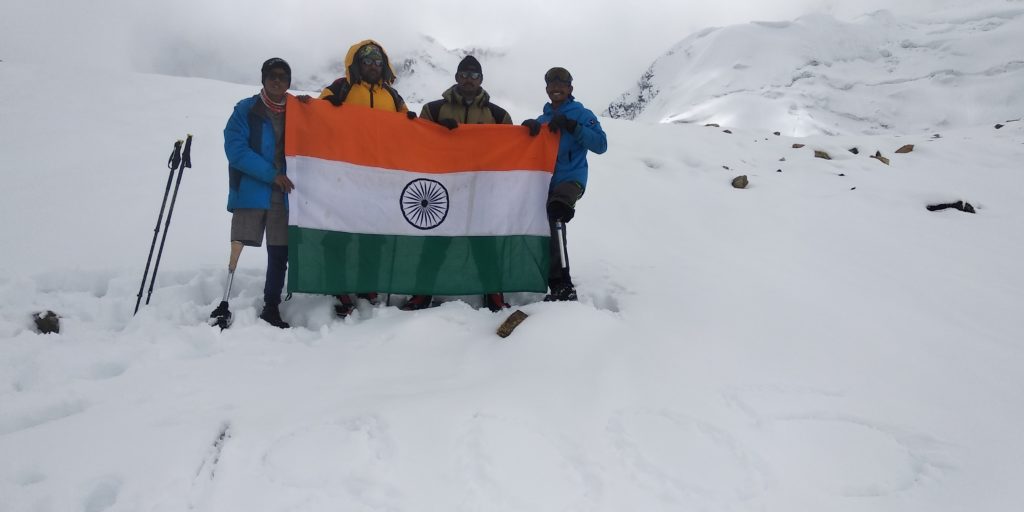 “The BSF team was amazing the helped us at every point in arriving at the divine place on Mt. Bhagirathi 2 at 18000ft. I never expected to see such places in my life. I thank AMF for giving me this opportunity. I’m now mentally prepared to scale Mt. Everest.” Says 17, year old above knee amputee, Aryavardhan from Telangana who also scaled the peak.

Harish Varma, the only Para-Arm Wrestler that we support as of today, just won 2 medals at the World Arm Wrestling Championship! 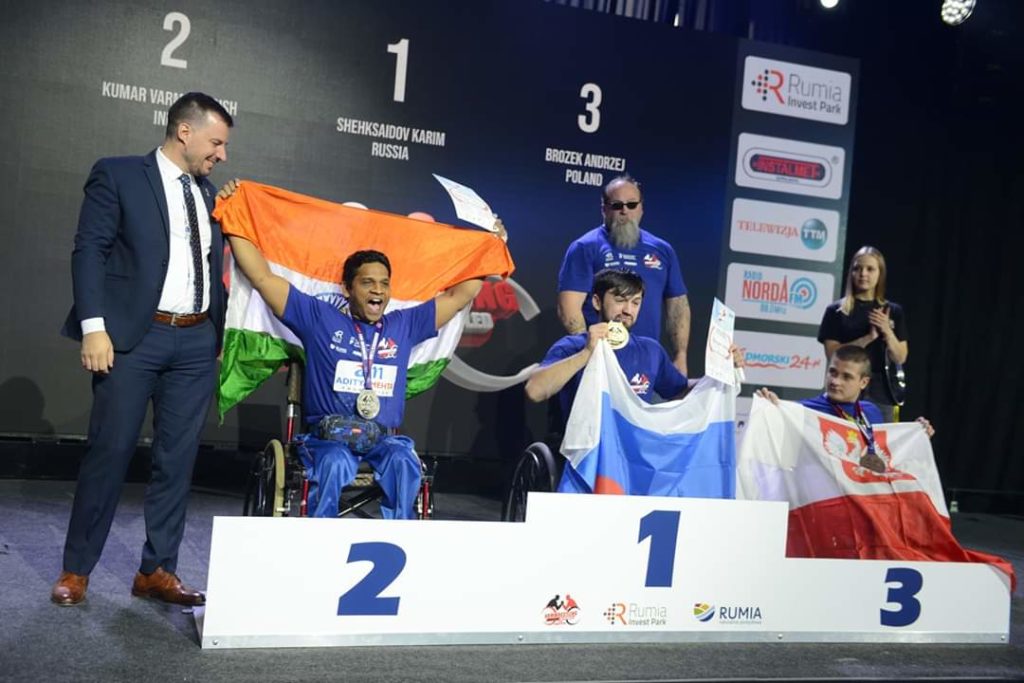 He also placed 4th in the Open Men’s event, which happens to be his best performance ever! (Open Men’s is for both heavyweight as well as lightweight category in Arm Wrestling.)

On speaking with him over the phone, an ecstatic Harish had something that he wanted to say – “I am incredibly happy to pull off this performance. I sincerely thank the Aditya Mehta Foundation for the full sponsorship, and the Indian Arm Wrestling Federation for their support. I see a future where this medal marks the beginning of many medals for our Nation.”

Harish is excited to come back to India and train Para-Athletes at our upcoming National Training Camp.

2 medals for Bala at the Bangkok Open

Subramanian Balachandar has just moved forward and proven yet again that hard work and consistency bring in the results.

He finished the Bangkok Cup 2018 with a silver medal in the doubles category, and bronze in the singles.Congratulations, Bala! 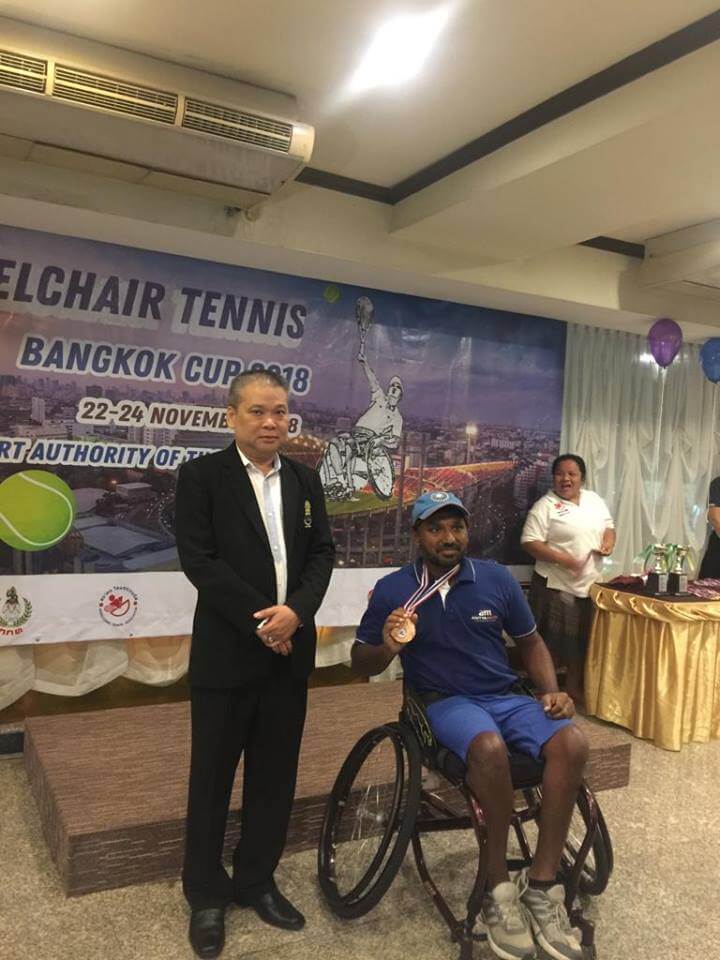 Indrajeet Pandey, from the Central Reserve Police Force : CRPF, had a stroke of bad luck when the wheel on his wheelchair broke in between his match. But he is taking the bad luck like a champion, as he knows that there will be plenty more opportunities in the future to prove himself.

Bronze for Anand at the Australian Para Badminton International 2018

Anand ended his campaign in Australia with a bronze medal in the Men’s Singles category.
Is he happy? Kind of.
Is he ecstatic? Not really.

Which only means that he’s got better performances coming up in the future! 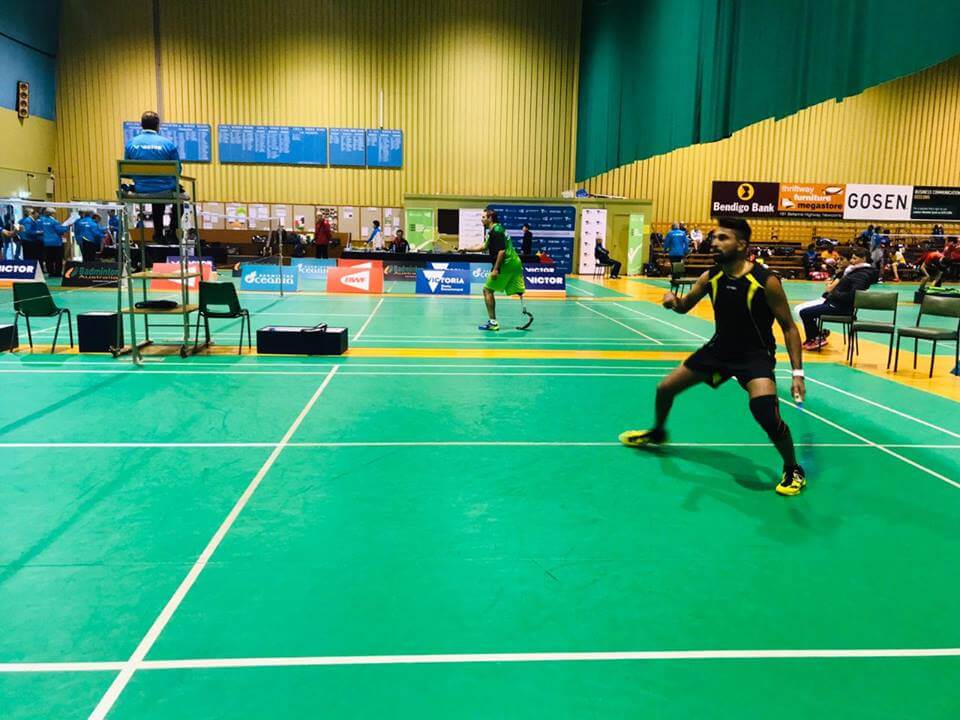 One more bronze medal for Bala at the Thailand Open

One more bronze medal at doubles in Thailand Open Wheelchair tennis 2018 held in Pattaya between 25th and 28th of this month! Bala played with his partner Shekar Veeraswamy against Thailand players in the semis and lost a thriller of a match, the scoreline reading 6-2, 6-7, 9-11 with a third set super tie breaker. 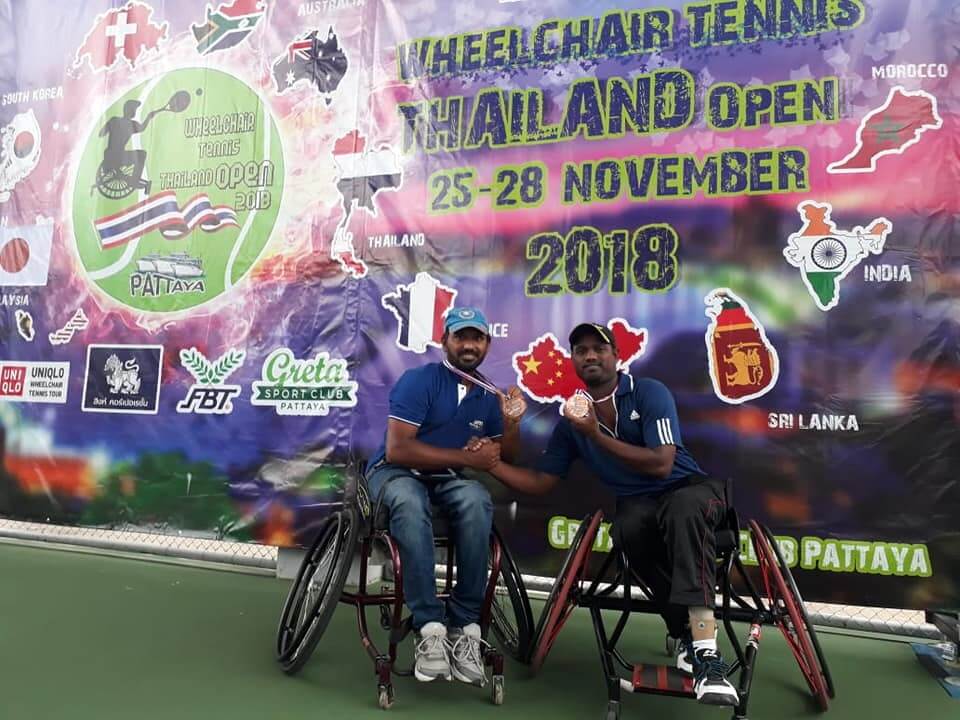 History was made at the Asian Para Games 2018, when Gurlal Singh from the Border Security Force won bronze in his Para-Cycling event. He becomes the first Indian ever (able bodied or otherwise) to win a medal in a cycling event at the Asian Games level. 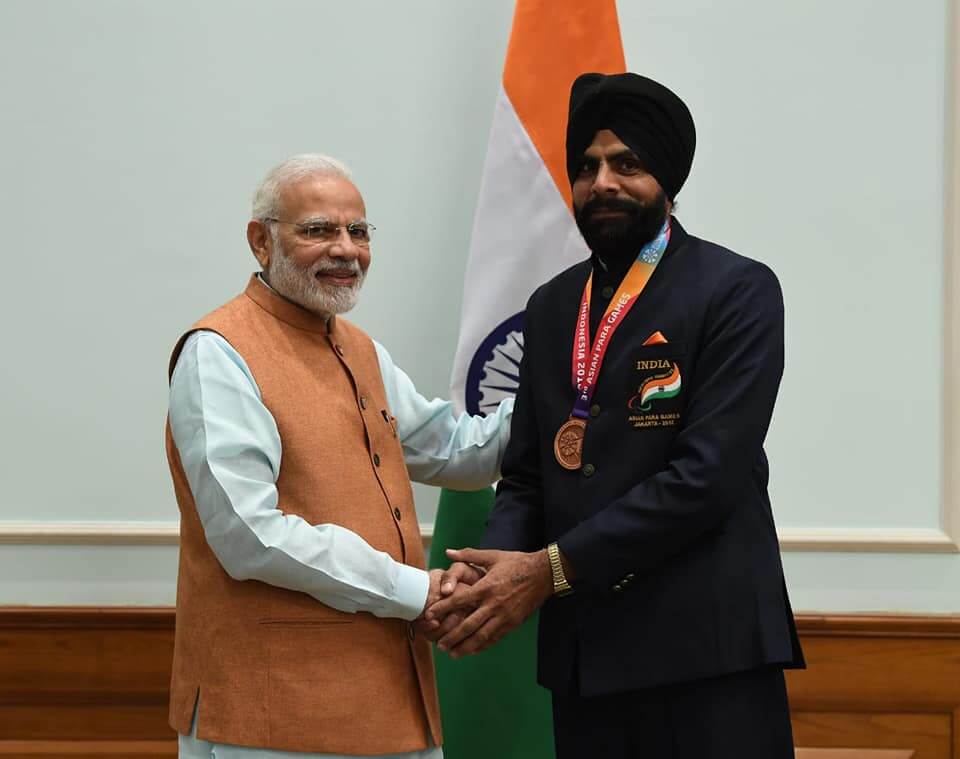 Chirag Baretha joined team AMF at our most recent presentation ceremony. In Jakarta, he played Para Badminton for our National Team at the Asian Para Games 2018, and brought us our first medal!
Chirag was part of a six member squad that represented us in the team event, and brought home a bronze medal. 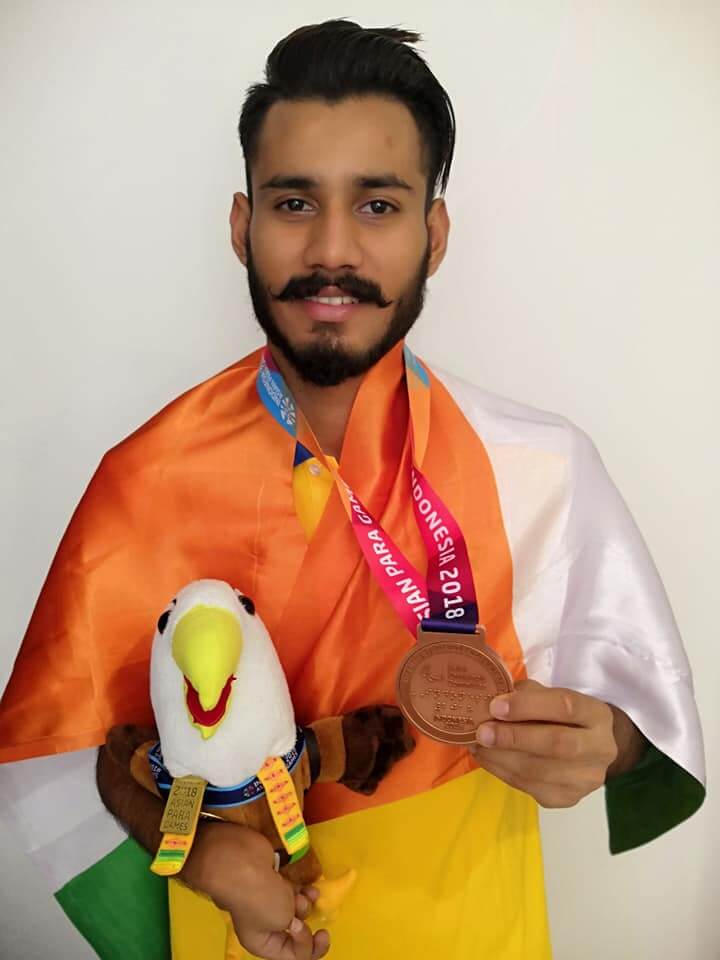 AMF is incredibly proud of Anand Kumar, who has been a consistent performer at the international level for the past decade. He secured a bronze medal at the Asian Para Games 2018, and added to India’s biggest medal haul in the history of the games. 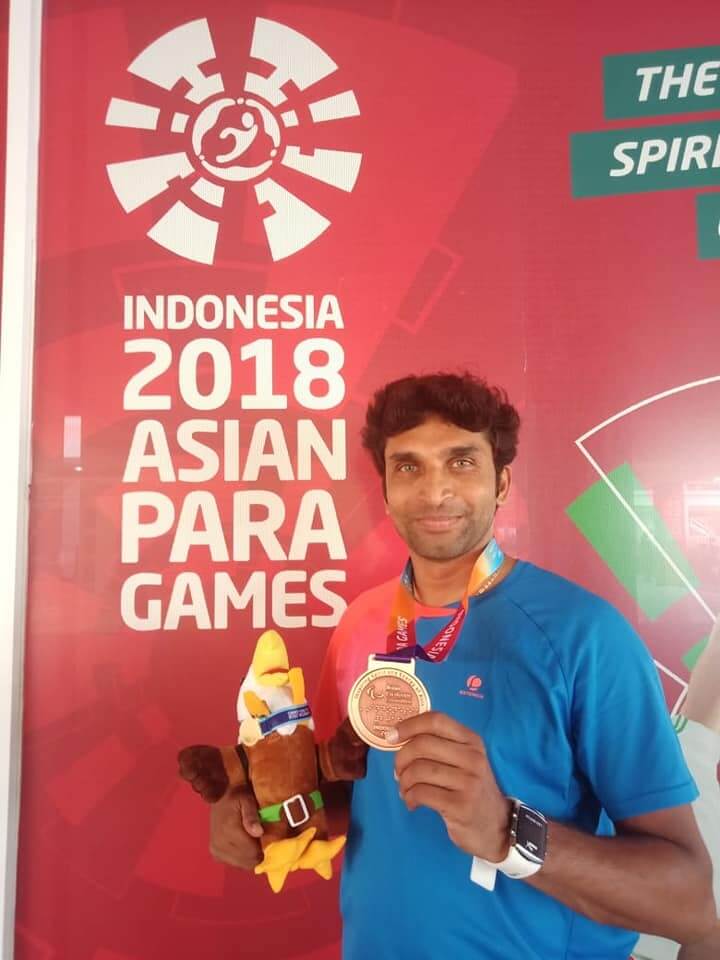 Subramaniam Balachandar is a pharmacologist who works a 6 pm to 3 am shift voluntarily in order to accommodate time for practicing his passion- wheelchair tennis. After finishing his shift at 3 am, he heads out to train in the morning by 8:30 am each day. And the results speak for themselves!
In Chennai, at the Marina Open Wheelchair Tennis AITA Ranking Tournament, Bala blazed past all his opponents, including the National top-ranked player in his final match to win two titles. He was crowned the Champion in the singles category as well as doubles, along with his doubles partner Karunakaran Karthik.
His hard work, dedication, and determination are paying dividends, and the Aditya Mehta Foundation is proud to be associated with him. We had provided Bala with a sports wheelchair worth Rs.3.5Lakhs, which is what he uses while training and competing.

The Indian Para Badminton contingent was at it recently in the Uganda Para Badminton Championship 2017. Two athletes who are supported by us at the Aditya Mehta Foundation brought more laurels to our country by adding 3 more medals to their already stunning tally.
Manoj Sarkar won a gold medal in the singles category, while Anand Kumar won a silver.
The two then paired up to win a gold in the doubles category as well.
This raises our International Badminton medals tally for 2016/17 from 16 to 19 medals! We are incredibly proud of our champions.

Amar Kumar Santra lost his eyesight in 2013, when he met with an accident. Only in 2016 did he start training with us, under our Para Swimming Coach, Bholanath Dalui. Within a year of his embarking in the sport, he showed up at the National Para Swimming Championships and bagged one Gold medal in the 200 metre Individual Medley event, and two silvers in the 100 metre and 50 metre freestyle events. His sincerity in training has brought him a great distance forward within such a short span of time, and we believe that he will soon turn into an excellent International Performer.

The badminton athletes who were sponsored about by our Foundation, won SEVEN MEDALS at the Asian Para Badminton Championship held in Beijing, China, in November 2016. Adding these 7 to the 9 International medals won by them over the course of this year sums up to a whopping 16 International medals in one year. India truly is en-route to the top of the table at Para Sports.

A Skill Development Centre has also been established by Border Security Force in collaboration with the Adtya Mehta Foundation at BSF Training Centre, Chawla. This Skill Development Centre will be the organization’s first big step towards its vision to make India the World’s best country in Para-Sports. It will be a place where any person with a disability can make his dreams come true.

The 6th Asian Para-Cycling Championship was held in Bahrain

The 6th Asian Para-Cycling Championship was held in Bahrain in the month of February and we are glad to share with you that 3 of our athletes occupied the first 3 spots in the 12.8 km Individual Time Trial on the opening day of the championship.

All of them train at the Aditya Mehta Foundation. Infact, Aditya Mehta himself was among the eight that represented India in the championships.

It feels good rather, boosts you up when your work is appreciated. And so we are here appreciating Team AMF for their exceptional performance at the Irish Para Badminton Internationals.
All the winners-Anand Kumar, Mark Dharmai, Manoj Sarkar and Girish Sharma were felicitated by our guests for the evening Shilpa Reddy, Regina Cassandra, Shri A Dinakar Babu (Managing Director, Sports Authority of Telangana State) and Shri Vijay Bhatia(Head, Inorbit Cyberabad).

We have counselled more than 200 jawaans of the para-military forces and inspired a majority of them to take up sports. National level training camp was held in regards to the same which saw the participation of more than 50 persons with various disabilities. They were trained in more than half a dozen of para-sports by National para-sports champions with commendable world rankings. Further, these officials are going to get trained for a considerable amount of time under the same coaches for enabling them to participate in National Championships.

In October 2015 two of our para- athletes – Anand Kumar and Girish Sharma won 2 gold medals and one silver medal, respectively, at First Peru Para-badminton Championship. Girish played badminton in a specialised wheel chair that AMF provided him with the funds raised by Infinity Ride 2015. This was the first time he was playing with a special customised wheel chair. He previously won several medals in the standing category, but this was his first attempt with a specialised wheel chair. We heartily congratulate Anand and Girish Sharma who have brought accolades to our nation.